The main part of St Erconwald's Church was built in 1937, the extension containing the Sanctuary followed in 1951.

The first church was built in 1905 and it was the following year that a meeting of persons interested in forming a new Catholic Mission was held in the presence of the Bishop of Southwark. The meeting took place in the Presbytery of St. Charles Boromeo, Weybridge on Sunday 4th February 1906.

Thanks to the efforts of Miss Mary S. Kearney of Erin Lodge, Thames, a committee was formed at that meeting and promises of financial support were given.

The cost of the first Church was £ 1,000 and the annual interest due was £40. The minutes of the February meeting show a list of subscriptions promised ranging from £2 to £ 12 from thirteen parishioners, totalling 73 pounds 12 shillings. The total sum needed that year to service the loan and to cover the weekly expense of providing a Priest to say Mass was £ 100.

The Bishop agreed to open the Church and provide the services of a priest on condition that the local people would guarantee this amount. Miss Kearney and her committee solved the problem of the shortfall between the promised subscriptions and the £ 100 required, by persuading the thirteen subscribers to increase their pledges by 50%, an additional 36 pounds sixteen shillings!

A census of the number of Catholics in Walton indicated that the Mission would continue to grow and with the finance now secured, the Chapel of Ease which is now the Parish Hall was opened in 1906 and served from Surbiton. The Priest cycled over on Saturday evenings and stayed with members of the small congregation, primarily Mr. & Mrs. P. Wilson of 34 Winchester Road. Subsequently, the Mission was taken over by the Clergy at St. George's College who ran it until 1929 when Father Stephen O'Beirne was appointed.

Father O'Beirne bought the site of the present Church in 1931. Bishop Amigo directed that the new Church be dedicated to St. Erconwald.

Father Fred Copsey was appointed in 1933 and it was he who started the building of the church in 1937. The estimated cost, including a tower which was then intended, was £6,000, but Bishop Amigo thought this amount too ambitious an undertaking for the Parish so work was stopped when the Nave was built.

Father Robert P. Madden arrived in 1958 to begin almost 30 years as Parish Priest of Saint Erconwalds. He had been instructed by the Bishop to "build something at Hersham". A small all purpose hall had been planned but Father Madden, backed by a business committee, decided to go ahead immediately with the Church we see at Hersham today and to accept the financial burden involved in addition to the remaining debt at Walton. The money was raised by a bank overdraft of £ 15,000 and All Saints at Hersham was opened in less than 18 months.

Meanwhile, progress at Walton meant that trees and bushes (and a telegraph pole!) had been cleared to provide the car park, and the narthex and Church porch were built. This work cost £6,000, as much as the original estimate for the whole church. The entire debt for the work at St. Erconwalds and All Saints was cleared in less than 8 years: a remarkable achievement and a tribute to Father Madden's leadership and the hard work and generosity of the parishioners.

In 1993 Fr Liam O'Connor took over from Fr Jerry as our parish priest. Recent events include the ordination of Royston Pegley in December 2003 - the first at St Erconwalds - and our centenary in September 2005.

After 13 years at St Erconwald's, in September Fr Liam moved to the parish of Goring-by-Sea.
Fr John Pearson took over as parish priest in 2006 and died in March 2018
Fr John started the long link with the young people of St Michael's in Uganda
Fr Richard Biggerstaff took over as parish priest in March 2018 and relinquished his duties in May 2020
Fr Bill became priest in charge in May 2020 and retired on August 31st 2021
Fr Ruslan became Parish Priest on 1st September 2021 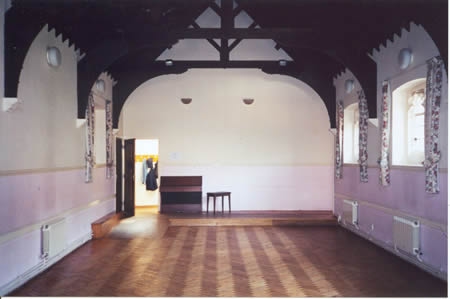 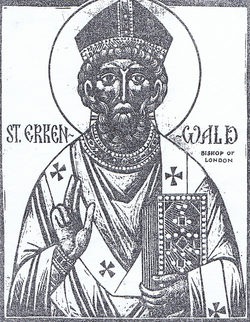 Erconwald was born at Lindsey,[1] and was supposedly of royal ancestry.[2] Erconwald gave up his share of family money to help establish two Benedictine abbeys, Chertsey Abbey in Surrey[3] in 661 for men, and Barking Abbey for women.[1][4] His sister, Æthelburg, was Abbess of Barking,[1][5] while he served as Abbot of Chertsey.[6]

In 675, Erconwald became the Bishop of London, after Wine.[7] He was the choice of Archbishop Theodore of Canterbury.[6] While bishop, he contributed to King Ine of Wessex's law code, and is mentioned specifically in the code as a contributor.[8] He is also reputed to have converted Sebba, King of the East Saxons to Christianity in 677.[citation needed] Current historical scholarship credits Erconwald with a large role in the evolution of Anglo-Saxon charters, and it is possible that he drafted the charter of Caedwalla to Farnham.[5] King Ine of Wessex named Erconwald as an advisor on his laws.[9]

Erconwald died in 693[7] and his remains were buried at Old St Paul's Cathedral. His grave was a popular place of pilgrimage in the Middle Ages, and was destroyed together with a number of other tombs in the cathedral during the Reformation.

Erconwald's feast day is 30 April, with translations being celebrated on 1 February and 13 May